The Room Wiki
ALL POSTS

@Jackovalltrades I play the mobile version of The Room 3 and I have encountered both blue and orange writing. I think the orange appears once you start the token search before you complete all levels, and she will write after that certain messages hinting at the next level. For example, if you have not completed the Forge yet and you give her the third token, she will write “The Forge Awaits.” However, the blue writing appears after you complete either all levels or get the Imprisoned or possibly the other ending as well, and she won’t write any more messages after “He Deceives You.” Just a thought, but I need to verify that.

Like you said, the initials could be from an earlier point in development, which is maybe the case here. However, you said that the statue thing could be a dream, which is plausible, but I don’t believe it’s from a different game. For reference, I had the experience around the same time when I was still terrified of playing FNaF 2, and I was (probably) 10 so it couldn’t have been from any horror game since, you know, I was really scared of horror at the time (I still kinda am now but that’s besides the point). Maybe if we looked into the mobile files of the original Room because that’s the only version I have then we can see if the picture is still there. I’ve never seen anyone else talk about these games’ unused content online, so this could be incredible if we did find out anything

I think that may have been what the devs were trying to say but they maybe scrapped the letter from Old Sins because they didn’t want to give too much information away. Solid theory overall, and I think it’s what Fireproof is trying to tell us.

It sound plausible, but I think there are 2 things that don’t make sense to me. First, the initials on the stamp (the red thing) aren’t AS, but I think it says R&F or RS, it’s hard to make out. Second, I have a memory of my first time playing The Room 1 on kindle fire and for some reason, I remember a scene before you are taken to the title screen. It had something like a statue or something like that on the ground of a person with a child (I think?) and next to it was a note similar to that, then I entered the building and came to the title screen. It’s possible this could have been a really vivid dream, but I’m not sure, and it’s weird because how would I dream about a letter that I had only known existed about 6 years later? This is way too long for it’s own good, but that’s my response. 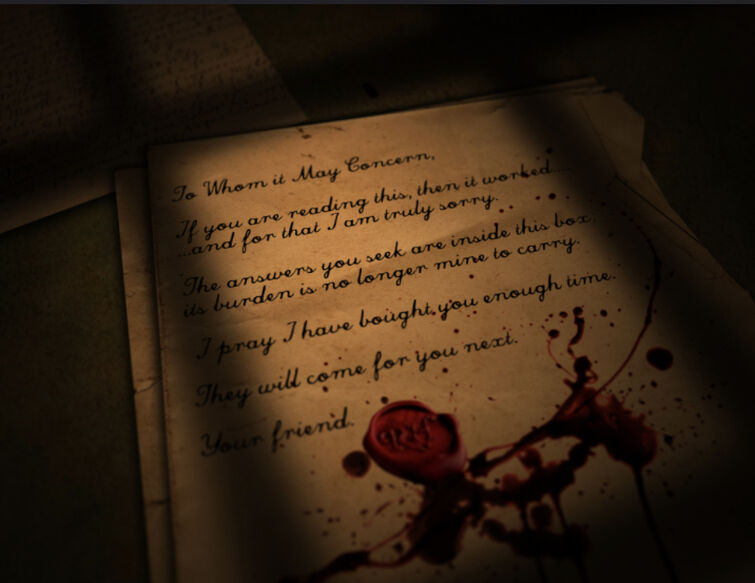