Can you eat the null?

Edit
watch 01:54
Obi-Wan Finale - The Loop
Do you like this video?
Play Sound

DISCLAIMER: This is a running joke in the Discord community. Please, do not take this seriously at all, we're just memeing. Eating the Null does not come up in the games at all.

Yes. Technically speaking, all things are edible. The question remains whether or not such things should be eaten.

From what is known of the Null, its mere presence can cause the warping of reality, but its worst effects do not take root right away. In The Room, AS does not begin experiencing visions and his manor does not begin to deform until a raw sample of Null is distilled. However, these effects do worsen over time, which is why Null samples must be properly contained in order to be used. The Null appears to prefer complex environments that it can complicate and distort, such as houses and machines. Abigail Lockwood hides her husband's Null sample inside her childhood dollhouse to contain it, and The Craftsman is able to use his mechanical knowledge to construct prisons for it for the most part. From these facts, we may speculate that a Null sample consumed by a human may begin to exert similar effects on the human body, as the body is simply an anatomical machine. The results of such distortion, if not immediately fatal, would likely produce horrors never before witnessed by mankind. As such, this Wikipedia site does not condone the consumption of the Null element or its associated byproducts. 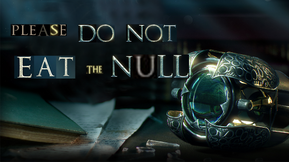