Grey Holm is a sprawling estate on an island located somewhere in the English Channel. It serves as the main setting for The Room Three. It is The Craftsman’s ancestral home, and the place where he conducts his operations: trapping people who he believes can help him power the portal to the Null Planet. 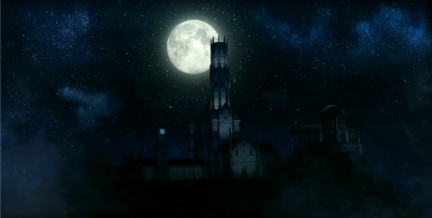 The player visits Grey Holm briefly in the fourth chapter of The Room VR: A Dark Matter, when they are teleported to it (or to a semblance of it) by The Witch.

For many years, dating back to at least the 18th Century, Grey Holm was the manor of an unknown noble family. The house insginia had four charges: a rat on field of red, a grasshopper on field of blue, an owl on field of green, and a snake on field of yellow.

The previous family seemed to be artistically and academically inclined, as the manor is complete with a library, an observatory, a lighthouse, a functioning clock tower, and a forge. There is some suggestion of an organization centered around the Observatory, represented by the symbol of a star and crescent moon and the Greek letters "ΝΨΞ" (Nu Psi Xi). The plinth in the Observatory also has the words "ANNO DOM. 1788" engraved, suggesting either the Observatory or this unknown order was founded in 1788.

In his earlier days, The Craftsman used the Forge at Grey Holm to begin crafting his masterworks and found his main company, Talisman. This would appear to be where his interests in both the Null and inventing began, and where he continued to operate up through The Room Three. Talisman Apothecary Supplies was supposedly founded in 1789, and the main branch manufacturing safes and other such contraptions was solidified in 1807. The Pyre, the island's lighthouse, was apparently manufactured by the company "Pyre Quality Service", which was founded in 1864.

According to The Craftsman, the house's clock tower was added by his great-grandfather, "though his time ran out earlier than expected".

The Craftsman boasts Grey Holm as his ancestral home; however, as his true identity is yet to be acertained, the nature of his relationship to the family is still in question. Evidence of its former inhabitants can be found throughout the manor, from faceless photographs to certificates on the walls, yet by the time the protagonist arrives (ca. 1897), The Craftsman appears to be the only one living there.

The Craftsman claims in a letter to the protagonist that "Seldom few visitors have walked these halls, fewer still have walked free of them". For many years, Grey Holm was the center of The Craftsman's research into the Null, research that involved and at times required the trapping of human souls. These souls were used to power The Craftsman's equipment and experiments. He manipulated many of "the greatest minds of history", taking them in as apprentices and then using their own curiosity against them to imprison them. Two of such apprentices included Margaret Cox and Simon Grayson, both of whom remain trapped in the Grey Holm library by the time the protagonist arrives there. Maggy is trapped within a tarot card reading machine, while Grayson is trapped in a pop-up paper theater. Their prisons exist seemingly more for The Craftsman's amusement and self-satisfaction than for practical reasons. It can be assumed that a number of the house's former inhabitants, including the rest of The Craftsman's family, met similar fates.

In The Room Three[]

As The Craftsman's work with the Null became more and more intensive, the manor began to distort and become more labyrinthine. To combat this, The Craftsman constructed a number of doorway machines in order to navigate the building without becoming lost. However, these machines also required souls to power them, and The Craftsman needed a new power source to complete his final ritual. It is around this time that he takes an interest in the protagonist, still searching for answers after AS's disappearance and death. He notes the power of their soul, and decides to "invite" them to Grey Holm by tipping them off to its location and then kidnapping them on the train ride there.

The events of The Room Three involve The Craftsman putting the protagonist through numerous trials in Grey Holm. Once these trials are complete and the protagonist constructs The Craftsman's Key, the timeline splits into a number of possibilities as the game's different endings are revealed.

In the Imprisoned ending, the protagonist follows The Craftsman's orders and proceeds to become trapped in an infinite maze within a puzzle box. The Craftsman then uses their soul to open a powerful gateway to what may be the Null planet.

In both the Escape and Release endings, the protagonist heeds the warnings of Margaret Cox through the fortune-telling machine and finds artifacts hidden by The Craftsman around the Nexus of Grey Holm. The exact consequences wrought by these artifacts are determined by which of them the player uses and how, but the end results for Grey Holm are approximately the same. In both endings, Null tendrils erupt from beneath the manor and reduce it to rubble as the protagonist narrowly escapes by boat.

It is not entirely clear what happens to Grey Holm when the player achieves the Lost ending, as the protagonist is teleported to the surface of Mars. However, it can be assumed that they simply left The Craftsman behind, and that Grey Holm remained standing.

The Nexus is the primary location of the game, and the one the player returns to most often. It is a stopping point between levels. Each time a level is completed, the protagonist is returned here, to deposit the Null shard they collected and work on opening the way to the next level. Almost every room in this section contains a doorway machine which the player must activate to travel to the next section of the castle. There are also a number of secrets to be found when the player strays from The Craftsman's predetermined path and explores some of the curiosities within the Nexus rooms - secrets that may eventually lead them to alternate endings.

This room is at the center of the Grey Holm Nexus. It is ringed by a number of doorways, which are gradually revealed over the course of the game. At the center of the room is a Null font, where the player must place each shard they find at the end of every level.

Rooms that branch off of the Altar Room include the Study, the Library, the Cellar, and the Conservatory. The room also contains the doorway which is used to teleport the protagonist to the High Tower at the end of the game. The doorway is only opened once the Craftsman's Key is complete.

The study contains a desk and a clock. It also has the doorway machine leading to the Pyre.

In the Library are Maggy's machine and Simon's folding theater. There is also a music playing device and a lectern which later reveals the elevator to the Attic.

The cellar is located off of the room the Protagonist comes in from. Inside are some breaker boxes and a set of filing drawers.

There are two rooms to the Conservatory. Important features include an overgrown tree, a brick wall, and some strange contraptions, including a music playback device.

The attic is only accessible through the elevator on the ground floor of the library. The elevator is revealed when a particular book is placed on a lectern in the wall, which moves aside to reveal it. 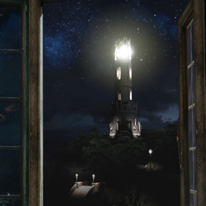 "Travelers such as ourselves, however, require such things to find our path. A light in the black."

The Pyre is the lighthouse of Grey Holm. Although functional, it has not been lit for many years by the events of the game, as The Craftsman claims that "ships need no beacon to warn them off this place".

The main feature of this room is a large, three-dimensional wooden map of Grey Holm, which takes up the center of the tower. Pieces of this map are added gradually and interacted with as part of the puzzle.

Another notable detail is a diving helmet which is mounted on a stand by one of the room's windows. The helmet still contains the skull of its former wearer. According to The Craftsman, the "tenacious aquanaut" was dashed against the rocks of the island while prying into The Craftsman's affairs.

"Your path will appear when the last bell tolls midnight. A trifle dramatic, I know, but our ancestors understood more than they realized. There truly are moments where the cycle of our world brings it closer to its neighbors."

"The first set of keys you will have to make yourself, but the final one is held ready for you."

"Now you shall see what this whole adventure has been in pursuit of. Have you ever experienced a moment so tantalising?"

The boathouse is seen only twice in the game: once in miniature form on the wooden map in the Pyre, and once in both the Escape and Release endings.

Greyhenge is as of yet a mostly theoretical location at Grey Holm. The only evidence of its existence lies in the table map within the Pyre, where a standing-stones courtyard is shown as a feature of the island.

The Craftsman seemingly spent many of his formative years at Grey Holm, learning much of the arts and sciences. At a certain point, however, he resolved to make the place his own, using the lives of his family to further his experiments and establishing himself as the sole inheritor of the mansion. Once he ran out of immediate family to prey upon, he was forced to turn to outsiders as a source of power, seeking out brilliant minds to ensnare in the pursuit of the Null so that he could harvest their souls.

Margaret "Maggy" Cox was one of the victims of The Craftsman's schemes, who became trapped while trying to understand the Null. Her soul resides in the fortune-telling automaton in the Library. It is possible she had some sort of relationship to Grey Holm even before she was imprisoned there. In The Room Two, she has a number of paintings in her apartment of a castle that somewhat resembles Grey Holm.

Simon Grayson was another victim of The Craftsman, who imprisoned his soul in the paper theatre on the second floor of the library. His soul is not active like Maggy's, and does not make any attempts of its own at contact.