The Room Three is the third game in the series, and happens directly after The Room Two. It features the same protagonist from the previous games. Unlike The Room Two, where the player is transported across many places in time, the vast majority of The Room Three is set on one island: Grey Holm. 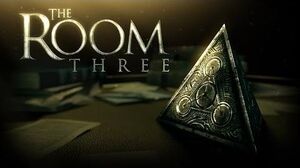 The game begins with the protagonist riding in a train car. By reading their journal, the player learns that they are still trying to solve the mysteries of the Null after the destruction of A.S.'s Manor. After being gaslighted by the Royal Institute, they received an anonymous tip about the location of an island off the south coast of Britain, and are traveling there by train to investigate.

As the train passes under a tunnel, a figure briefly appears on the seat opposite the protagonist, leaving behind a small wooden box and a key. This is the tutorial puzzle which introduces the player to the eyepiece. Inside the box is an engraved pyramid - a Null shard. As the protagonist picks up the pyramid, their train travels through yet another tunnel, and when the darkness clears, they find that they have been somehow transported to Grey Holm, a large and isolated manor located on the island they had been searching for.

Here, the protagonist is introduced by note to The Craftsman, the mysterious owner of Grey Holm, who they also briefly see in a cutscene when they first arrive. The Craftsman tells the protagonist that he has brought them to Grey Holm because he has some purpose in mind for them, but that he first intends to test their skill. He gives the player an additional lens for their eyepiece, which adds the mechanic of superzooming into small spaces such as keyholes. After surpassing the first puzzle, the player enters a room with a Font where the engraved pyramid is to be placed, making it apparently the first of five. The font then presents the player with a small shield which allows them to unlock the Study, an adjoining room to the main altar room.

In the study, the player must activate several components of a doorway machine, which opens a Null portal in the wall, leading them to the next chapter. While activating the machine, the player may also notice a desk with several drawers, and a grandfather clock.

The Pyre is a tall tower that serves as the Grey Holm lighthouse, and the first major puzzle room in the game. It is notable for featuring a giant wooden map of the entire island. Using the superzoom lens allows the protagonist to shrink down and explore areas of it, some of which they will re-explore in person in later chapters. Other elements of the puzzle include a desk, a diving helmet, and an elevator. As the puzzle is competed, the protagonist is brought up through the tower and brings light to the lighthouse. They are rewarded with the second Null shard, which forcibly teleports them back to the Study.

After the protagonist is returned to the Study, they place the shard on the font in the altar room, and can then unlock the Library. The Library contains another doorway machine, this time used to unlock the Clock Tower. Also in the library are several curiosities. There is a fortune telling machine featuring "Mystical Maggie", also known as Mystical Maggy or Margaret Cox, a character from The Room Two. On a shelf at the back of the room are a telephone and a gramophone, inactive if the player interacts with them. Ascending the stairway to a landing above the main library, the player finds a table with a contraption featuring artwork of Simon Grayson, a.k.a. The Great Khan, holding one of the Null shards.

The Clock Tower is the second main puzzle room in the game. The protagonist solves puzzles in order to start the clock and signal the arrival of midnight. There is an overarching mechanic of ringing bells which are used to break specific crystals. Other notable components are a miniature clock tower, a trained crow, a music box, a shadow puzzle, and two maps. The puzzle ends with the clock striking midnight, thus tolling the largest bell and breaking the final crystal. Once this is done, the third shard is released.

Once again, the protagonist is returned to the central hub of Grey Holm, allowing them to unlock the Conservatory. The Conservatory consists of two adjoining rooms. Some points of interest are a tree with a box embedded in its trunk, a crumbling brick wall, a table with several scientific instruments, and another table with a phone and a grampohone. There is also the usual doorway machine which is used to create a portal to The Forge.

The Forge is the third major puzzle room in the game and features a main puzzle element of melting down and re-forging a metal key into different molds. The Forge is canonically The Craftsman's workshop, where he founded the company of Talisman. In addition to the titular forge, the player must also use a hanging sandbag, a circular table saw, a beveling machine, a printing press, and a mechanical wooden hand to unlock different portions of a central box. Once the central box is completely unlocked, the fourth engraved pyramid is presented to the player.

Starting once again at the Grey Holm hub, the protagonist places the newest shard onto the altar and is presented with a book. When placed on a pedestal in the library, an elevator is revealed which can carry the protagonist up to a second floor, containing a balcony overlooking the first floor's altar room. On the stone railing surrounding this opening are a few devices, and a large safe sits on a table adjacent to the railing. Here a new twist is placed upon the waveform component of the doorway machine, as you need to return to the Study and use a screwdriver to borrow its mechanism for use in the new machine. Once this is done, the protagonist creates a doorway to The Observatory.

The Observatory is the fourth and final major puzzle room in the game. The main feature is the Observatory's telescope, which must be aligned to several celestial bodies. Other puzzles include a star map, a gear puzzle, a radar-like machine featuring an enormous globe, and a viewing screen allowing the protagonist to navigate a maze on another planet. The final puzzle is a giant model of the solar system in a courtyard outside the observatory, including the first four planets, which each must be activated and sent into orbit around the model sun. When the player has activated all the planets, the model of Mars opens a component containing the fifth and final shard.

The player is once again returned to Grey Holm, and upon returning to the central chamber and placing the final pyramid, they combine into The Craftsman's Key. This also unlocks a Null portal to the top of Grey Holm's tower, and the final location in the game.

From here, the player must place The Craftsman's Key on a central box and complete one last puzzle, involving the redirection of a beam of light across many surfaces. Upon focusing the light emitted from the Key, a door to the train from the first scene appears.

Walking through this doorway, the protagonist finds themselves back in their train compartment from the beginning of the game, with a letter from The Craftsman waiting on the table. The Craftsman explains that the player helped him achieve his goals but also consequently fell into his trap. Now lost in his labyrinth forever, the train rushes into one more tunnel. When it emerges on the other side, a temple is visible surrounded by miles and miles of maze. This is the base ending of the game, also known as the Imprisoned ending. After seeing the cinematic, the player is returned to the main menu, but there is still more that can be done.

One of the additions to the series made by The Room Three is the ability to unlock multiple endings. After achieving the Imprisoned ending, a "Change Your Fate" button appears on the main menu in place of the "Continue" button. This allows you return to the Grey Holm hub before making your way to the tower. From here, the player may solve a number of secret puzzles around Grey Holm and progress to the tower better equipped. None of the endings in the game have been confirmed to be canon by Fireproof, however they have said that if they were to continue the original trilogy, they would most likely continue off of the 'Lost' ending. 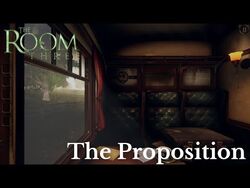 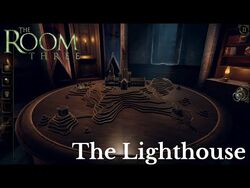 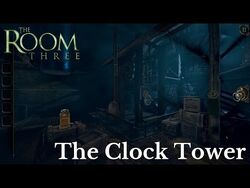 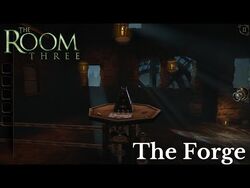 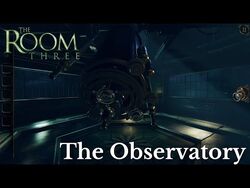 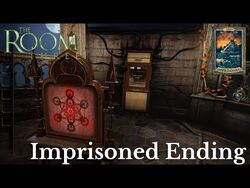 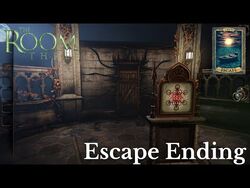 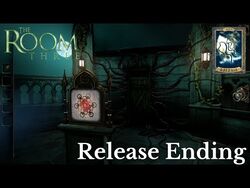 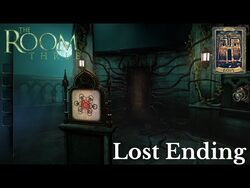