The Room Two is the second game in the series and in the main trilogy. It takes place directly after the events of The Room. 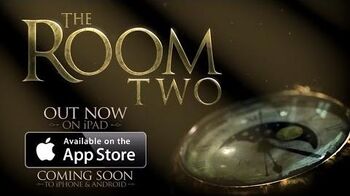 After traveling through a portal from the cog room, the protagonist emerges in a crypt. They discover two tables with several boxes and contraptions on top of them. They also find a note left by their friend, A.S., who was also the note-leaver from The Room. A.S. promises to help guide the player along on their journey to return to their own time and place.

There is also a note from an unknown author addressed to a Mr. Rigby, a grave robber hired to find a Null artifact.

Upon solving puzzles in the room, the player finds a new lens for their eyepiece and, finally, a Null sample, which opens the portal to the next room.

The player finds themselves below decks on a galleon. The puzzles center around a miniature model of the ship, a treasure chest, a table with weights, and a clock, which are revealed over time as different parts of the model ship are revealed.

A.S.'s notes express excitement at his newfound ability to travel the world "as simply as turning a corner", but also mention that some element of reality seems to be off. He later describes that he is beginning to feel like a prisoner or a rat in a maze.

The player also finds several journal entries from the captain of the galleon detailing the pursuit and destruction of a ship known as the Helena, and a prisoner they took on board who carried a powerful artifact.

The puzzle ends, again, with the player discovering a Null sample and opening the next portal.

The player arrives in a stone temple. According to the iconography throughout, the temple appears to be somewhere in South or Central America. After removing the iron bar holding the door in place, the player is able to enter the main sanctum of the temple, where the main puzzles are a mirror, a model temple, a crossbow, and a fuse line.

The note from A.S. expresses feeling lost and forsaken, trapped in an endless cycle of rooms and doors. He alludes to having traveled through so many places that he has filled the pages of his ledger with tallies denoting them.

The additional note-leaver is a priestess. She explains that her people were brought low by European invaders, and that she will use the Null to bring power back to them. However, in later notes, she concludes that the Null is too dangerous, and that she intends to seal it away within the temple.

The player finds the next Null sample by splitting a skull found inside the model temple, and is transported to the next chamber.

The next location is an apartment, later revealed to be Apartment E7,17 Franklin Court in London. The apartment belongs to Margaret Cox, a.k.a. Mystical Maggy, a fortune teller and spirit medium. The main puzzles include a camera, a table with a tarot-reading machine, a desk with a typewriter, a cabinet, and a safe.

Near the end of the level, a body appears at the central table in the apartment, revealed to be the body of A.S. His notes express hope that the player may have found him, as he has finally discovered the key to controlling one's path through the Null. Passing the key onto the player has required him to sacrifice his own life in some fashion. He encourages the player to go on and find the room where they began.

There are two additional notes. The first is from a man named Robert Bailey addressed to the "charlatan", Maggy Cox. He demands that she leave his grieving mother alone, and threatens to expose her as a fraud to the press. The second note is from Maggy, addressed to Simon Grayson, her mentor. She inquires into what he's currently doing, and asks for his aid in something; it is unclear exactly what. She tells him to meet her at The Lion at nine o'clock.

In addition to the notes, the typewriter offers many clues about past events. The speaker behind the words of the typewriter describes a journey to a hidden temple, one that soon led the speaker astray through time and space. The Null extended their life dramatically, but they eventually allowed death to claim them. There are also a number of secret messages that can be found by entering certain words into the typewriter.

Upon finding the Null sample, which this time takes the form of a globule of Null goop rather than a crystal, the player is transported to the next level.

The Crossing is a very short chapter, and leads directly into the next chapter, The Lab. The player finds themselves in a rowboat moored off the shore of a large castle. To proceed, they must retrieve a crank handle from a floating plank in the water. As they do so, a large tendril-like shape briefly surfaces nearby. They then attach the crank to a wheel at the front of the boat and use it to reel themselves in to shore. A short cinematic follows of the player ascending stairs and entering the estate.

The player finds themselves in a scientific laboratory. The main features include a shelf, a large cabinet, a central table with a box, several reflective magnifying glasses, a pool of Null goop, a film projector, and a battery-charging machine. The player must align a red beam of light across several points in the room to unlock the final key.

There is one final note from A.S. He praises the previous occupant of the laboratory, Professor de Montfaucon, who was also researching the Null, but says that despite his brilliance Montfaucon never uncovered the secret of the doors. A.S. explains that the Null has a deep connection to human souls, and that he had to give up his own to power the mechanism that would open the last doorway.

In the cabinet, there is a letter written by a Dr. Beckett asking Professor de Montfaucon to return his sister, Lucy, to the Kirkton Sanitorium, fearing for the woman's safety. There is also a series of notecards scattered around the chapter revealing Montfaucon's progress. Montfaucon was researching how Null might be used to extend someone's lifespan. It is revealed that what began as experiments on small animals later escalated to human testing, including tests done on the heart of Lucy.

Lucy's heart can be found inside the room's central box. The player activates the mechanism around it, which causes the heart to beat and power the next doorway.

Rather than bringing the player to another conventional room, the doorway leads them to the Cog Room once again, where they find an altar filled with Null goop and the final Null sample. By aligning the crystals correctly, the player opens the final doorway and enters through it.

The ending cinematic shows the player re-emerging in A.S.'s manor, where the first game took place. Right behind them, several Null tendrils emerge from the doorway and chase them through the house. They escape out the front door just in time to watch the house destroyed by tendrils.